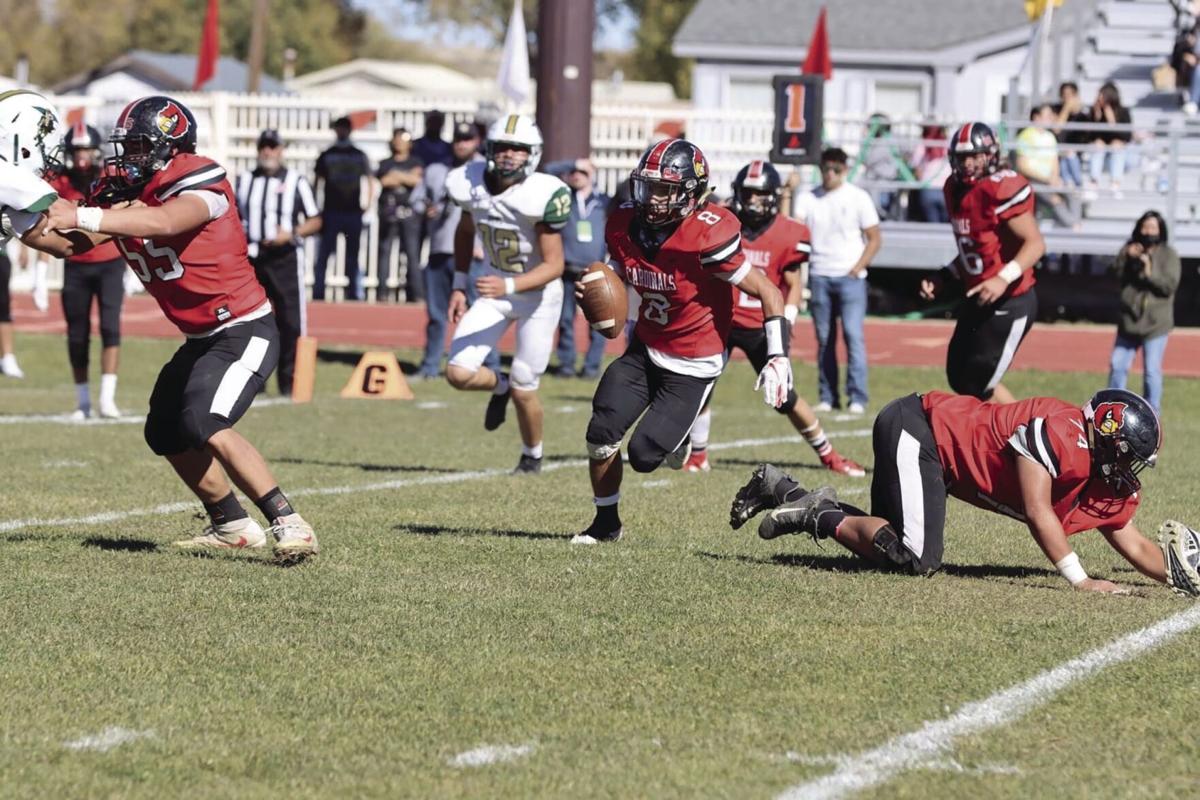 Mathew Gonzlaes (8) will look to replicate his performace from Oct. 30 when he ran for 244 yards and accumulated 360 yards of total offense en route to a 40-27 Cardinal victory. 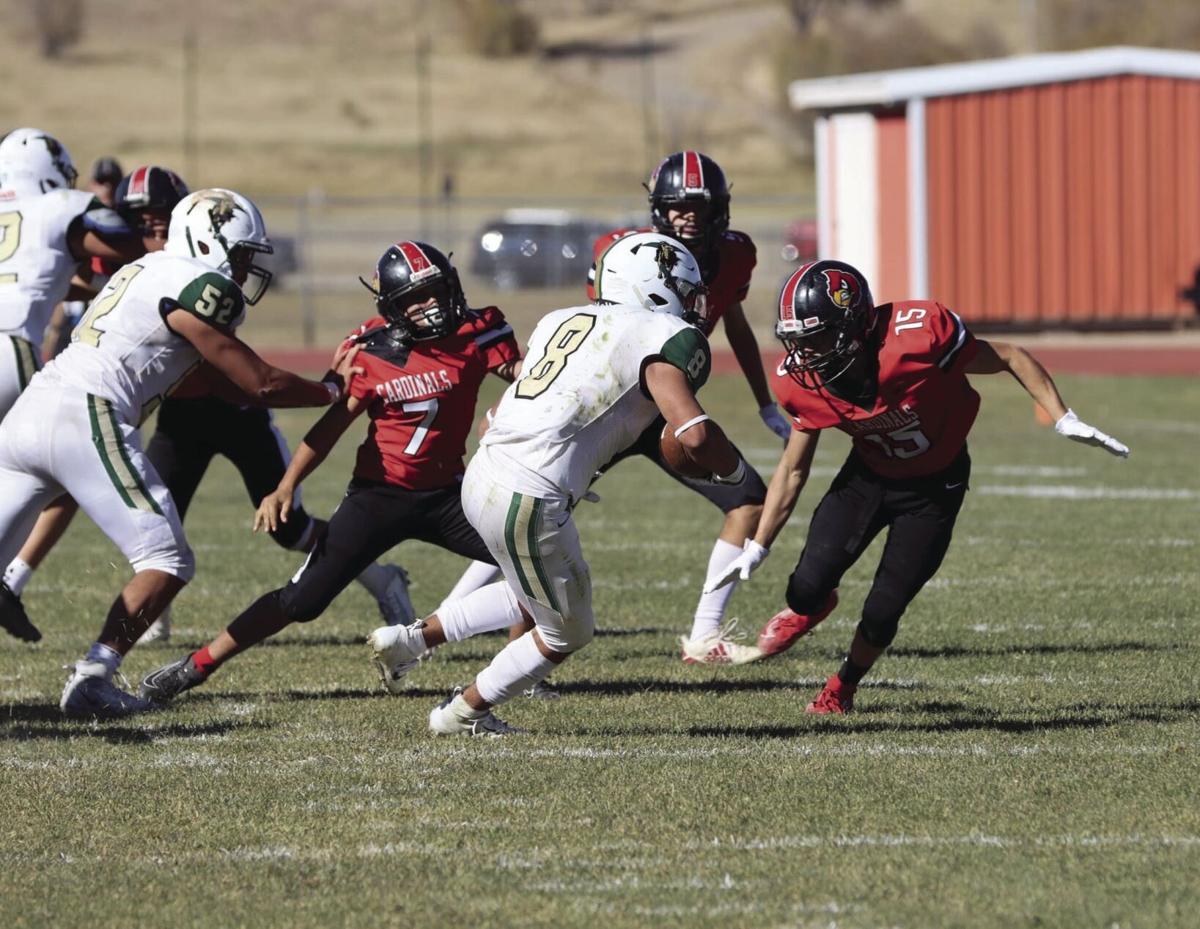 Damian Gallegos (8) will likely need to have a bigger game on the ground Saturday in order for the Dons to win. The Cardinals did a good job bottling up Gallegos in the running game, but he did have 83 yards and a touchdown receiving.

We didn’t get one in 2020, so it’s only right that we get two in 2021. At noon Saturday,  the Cardinals will host the Dons in the second Vegas Bowl in three weeks. This time the stakes are higher, as one of the teams from Las Vegas will have their season come to an end when the clock hits triple zeros.

It’s exactly where we were in 2019 when the Cardinals and Dons faced off in the second round of the playoffs. In fact, the two teams are the same seeds they were in 2019, with Robertson being  No. 3 and West Las Vegas being No. 6.

“It’s not a new feeling per se,” WLV head coach Adrian Gonzales said. “We’ve done this several times, this will be our third time, so it’s almost expected now anytime the schedule comes out.”

With these two matchups coming just 14 days apart, an easy question is what can change in that time to make this game any different from the first?

For the Cardinals, they don’t want a lot of things to change, mainly the results. The biggest reason they won was senior quarterback Mathew Gonzales. Gonzales racked up 360 yards of total offense, 244 of which were on the ground. If he plays even close to the level he played at two weeks ago, it’s hard to envision a Cardinal loss.

For Gonzales this season has been a build where he and the offense have steadily gotten better every week, with the turning point being in a 28-26 loss to No. 1 Raton. The Cardinals lost, but Gonzales led a two-minute drill that had the Cardinals in position to tie the game with just seconds left on the clock. Ultimately, they couldn’t get the two-point conversion and lost, but that was the game that showed themselves and everybody else in the state how good they are on offense. In the two games since, Robertson has scored 44 against St. Michael’s and 40 against West Las Vegas, they have found their stride at the perfect time.

“Mathew is a big key to our offense, he basically is our offense,” Gonzalez said. “He thinks every play is a touchdown play.”

While the Cardinals had the week off last week, the Dons were playing their first-round playoff game against Cobre. It was one that saw the Dons trail at halftime but run away with the contest in the second half. While the Dons did lose the first contest between the two that does not mean that they didn’t do anything well. They were ahead 20-12 midway through the third quarter, and a big reason was their passing attack, freshman quarterback CJ Perea threw for 311 yards and three touchdowns with four competitions being at least 40 yards. The Dons at their best have been a quick strike offense, able to score from anywhere on the field, and against the Cardinals it was no different.

The Dons biggest issue in the first game against the Cardinals was tackling. They simply couldn’t tackle Mat Gonzales and he just about single-handedly took over the game in the second half. There is no doubt that Robertson will make adjustments in order to limit what the Dons deep with their deep passing game in the first contest, but for the Dons their adjustment is simple, tackle Mathew Gonzales.

“We have to start with the first fundamental of football, which is tackling,” Gonzales said. “We have to tackle, we have to do a better job of tackling. We have to hold on for dear life and wait for help to arrive.”

Gonzales made it clear what his point of emphasis is, and he’s correct. There is no winning this game without better tackling. One thing the Dons did well defensively in the first contest was contain sophomore wide receiver Mateo Contreras. In fact, they shut him down, largely due to the efforts of senior cornerback Josh Gonzales. The Dons did a decent job of limiting the Cardinals passing game. There were few times in the game that the Cardinals were able to just drop back and throw the ball. When the Cardinals had success through the air was when Gonzales was able to improvise, evade the rush and find a receiver down the field after several seconds down the field. Taking away those scramble situations, not letting Gonzales get out of the pocket to improvise and of making the tackle to finish the play is paramount for the Dons.

For the Cardinals defense, they have to figure out how to balance defending the Dons running game and the passing game. Any team that plays the Dons first and foremost prepared to slow down senior running back Damian Gallegos, and the Cardinals did a pretty good job of limiting him on the ground, holding him to just 66 yards on 15 carries. That came at the expense of the passing game though, where Gallegos had 83 yards receiving, including a 48-yard touchdown catch. Josh Gonzales had 167 yards receiving and two touchdowns while consistently beating man to man coverage deep down the field. The Cardinals must adjust in order to assure that the Dons don’t have the same success deep down the field they had in the first contest, but if they commit too many resources to the passing game it could allow Gallegos to get going, which is the absolute last thing the Cardinals want to see on Saturday.

“We need to take care of those deep passes,” coach Gonzalez said. “I don’t think they had a sustained drive on us, but big plays really helped them out… that’s the worrisome thing about playing teams like this is that they can hit you deep at any time.”

The adjustments each team makes will likely determine who wins this Vegas Bowl rematch in the state quarterfinals. Kickoff is set for Saturday at noon at Cardinal Stadium.