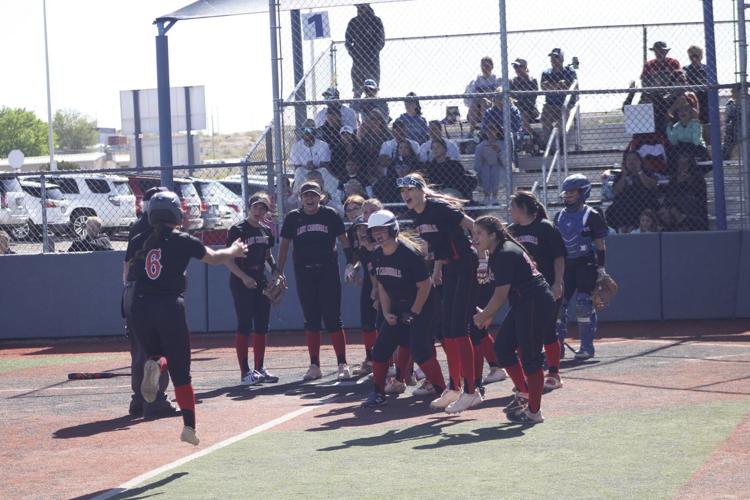 The Cardinals celebrate at home plate after a home run by Felicia Ulibarri (6) in their tournament game against the defending state champions Dexter. 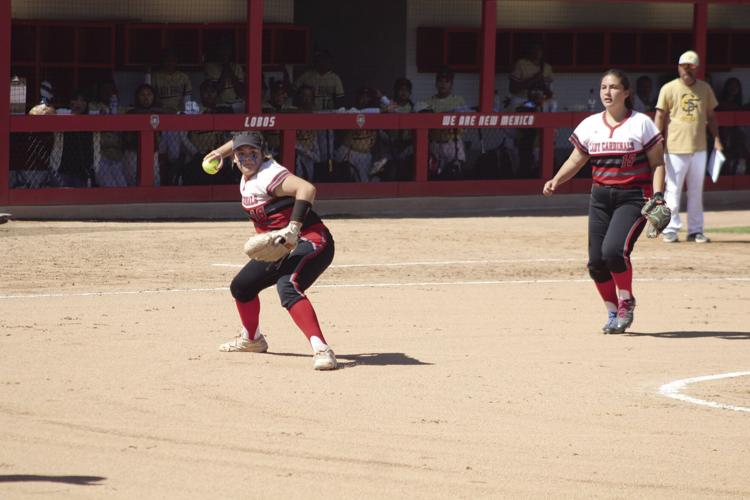 Arianna Sanchez comes off the mound to field a ground ball before throwing the runner out at first base in the state championship game. 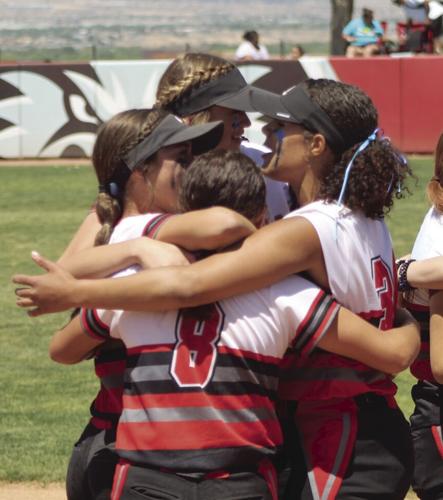 The four players who were part of all three state championship teams, Azlyn Padilla, Jayden Jenkins, Alexis Pacheco and Alyxa King embrace after the victory.

The Robertson Cardinals softball team took the hard road to the state championship. The road on the field was not necessarily difficult, they earned the number one seed after a great regular season, and played the minimum number of games in the state tournament, capturing the blue trophy after playing just four games, as opposed to a possible five, six or seven games. Where the Cardinals road was tough was in everything leading up to it.The Calf Canyon Fire displaced several members of the team for the week leading up to the state tournament, it left them without the ability to play some of their final regular season games or practice right before their biggest games of the season. In spite of all that, the Cardinals persevered and rolled through the state tournament in the same way they rolled through the regular season, capping it off with the first blue trophy in program history.

“I am just so happy for all of my teammates and all of our coaches,” freshman pitcher Arianna Sanchez said. “We’ve been going for the blue since the beginning, and even since last year, we didn’t get the chance to come here last year, and this year we got here, we put ourselves out there and we did it, we got the job done.”

No player exemplified the Cardinals toughness this season more than freshman pitcher Arianna Sanchez. Sanchez was the Cardinals ace this season, and in the final three games of the state tournament she is the one that coach Ulibarri gave the ball to in order to win the state title. Sanchez not only pitched each of the final 21 innings of the state tournament, in the span of 27 hours, she was one of the players who was displaced prior to the tournament. Sanchez had to deal with the possible consequences of the fire off the field, and she brought her A game on the mound when the team needed it most, shutting down Santa Fe Indian School twice in less than 24 hours to help clinch the blue.

The Cardinals did make quick work of their state tournament path, beating Tucumcari 24-0 in round one, defeating defending state champion Dexter 5-4

in round two and beating district rival SFIS 4-1 in the semifinals and 8-1 in the championship game. Perhaps the biggest reason why the Cardinals were able to make relatively quick work of their state tournament opponents is because of their regular season schedule. The Cardinals made sure to play some of the best teams in the state in non district play. Going up against teams like Cobre, Silver City, Rio Rancho and Bernalillo helped them become battle tested throughout the regular season and had them ready for the postseason.

What stands out about this Cardinal team is the star power across the board that they had. Sophomore first baseman Leigha Lucero was the thunderous bat in the middle of the order, hitting an astonishing .631 with nine home runs on the season. At the top of the order the freshmen duo of Alexis Pacheco and Taylor Quintana each hit over .500, .509 for Pacheco and .532 for Quintana and continuously set the table for a fearsome middle of the order. Junior Arianna Archuleta was hitting over .500 herself for most of the season, she did finish with a .489 batting average and was the team’s most clutch hitter in the postseason, especially in the two games against SFIS. All of that is before mentioning the pitcher Sanchez who threw 100 innings and had 145 strikeouts. The Robertson girls had three state championships this season, but this one probably had the most overall star power, so many players were elite at their positions and would’ve been maybe the unquestioned best player on several other teams. This talented group all came together on this team though, and that is what makes this group special.

What has to make the Cardinal faithful excited is the future of this team. This season was awesome, 25-4, undefeated district champions and a blue trophy to cap it all off. The exciting thing is that almost the entire team will be back next season. Of the nine starters in the state championship game, just one, centerfielder Felicia Ulibarri is a senior, almost everyone will be back. Pacheco, Quintana and Sanchez are three of the best players in the state already and they’re only freshmen. Lucero, only a sophomore, was perhaps the best hitter in the state this season, finishing the season ranking third in 3A in batting average, .631 and runs batted in, 46 and tied for first in home runs with nine.

This softball state championship caps off what has been an unprecedented athletic year for Robertson. They finish the school year with five blue trophies in team sports, along with a few individual titles in sports like tennis, wrestling and track and field. Five team state championships is something that has not been done in Las Vegas before and will likely never be done again. It takes a lot of talent, coaching, luck and a really special group of athletes. This season the Cardinals did have a really special group of athletes across the board, which is what makes this softball team a perfect champion to end the season. It was not just some of the stars mentioned earlier. Center fielder Felicia Ulibarri was not only a good hitter, hitting .400 with six home runs, she was also an outstanding defensive outfielder and led the team in stolen bases with 20. Junior Azlyn Padilla was one of the better utility players in the state, pitching for the Cardinals, as well as catching, playing in the infield and in the corner outfield spots, Padilla is also one of four players to have played on all three of the Lady Cardinals’ team state titles and is the only one to have been a regular starter on all three teams.

Special teams, special coaches and special athletes, Robertson had all of it in 2021-22, it’s not going to be a year that the Cardinals will forget anytime soon, nor should they.