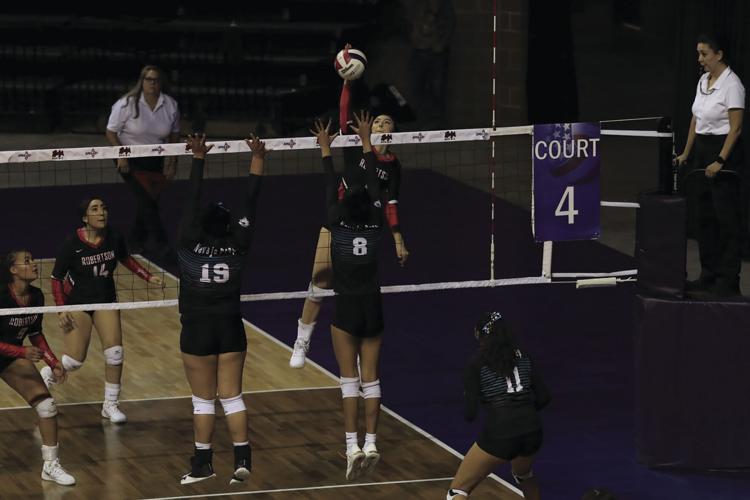 Tessa Ortiz rises up for a kill in a Robertson playoff game against Navajo Prep during the 2019 season. 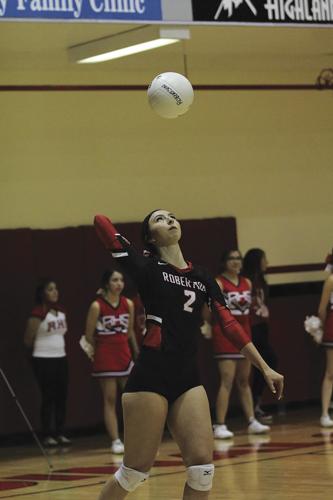 Ortiz serves in the Cardinals’ district championship game against St. Michael’s in 2019.

Tessa Ortiz rises up for a kill in a Robertson playoff game against Navajo Prep during the 2019 season.

Ortiz serves in the Cardinals’ district championship game against St. Michael’s in 2019.

Over the last few years in Las Vegas we’ve been lucky to see several of our local athletes have the opportunity to take their talents to the collegiate level, continuing their athletic careers for the college or university of their choice. Over the next couple of months we will be highlighting those athletes who have made the jump and are still in their college careers. The next athlete we will be spotlighting is former Robertson Cardinal Tessa Ortiz.

“I just feel like I had more fun playing volleyball during that season,” Ortiz said. “Of course I had a lot of fun regardless… but after my senior season I decided to sign to go play volleyball because I felt I had so much more to learn and a lot more to improve on and I think in these last two years I’ve grown so much as a volleyball player… of course I miss basketball, but I feel like volleyball gave me more opportunity to grow.”

Ortiz was something of a part-time volleyball player throughout high school, so once she arrived at Otero it was eye-opening the level she had to be at. In her high school career Ortiz’s summer was primarily focused on basketball, playing travel basketball and developing her skills alongside her family of basketball players. Otero was the first time in her life that Ortiz was a full time volleyball player, and the adjustment she had to make was apparent early on. You can practice, and do all of the drills and prepare in the best way possible, but until you are out on the court you do not realize just how different the level is, and Ortiz came to that realization in her team’s inaugural scrimmage of the season, her first with the team.

“It was a scrimmage in the preseason and I was blocking middle and I could not get a block and my coach pulled me out and she yelled at me and told me how it was,” Ortiz said. “That’s just when I realized that things aren’t happening because you’re not doing the right thing and in high school I feel like that would’ve never happened to me and in that moment it really opened my eyes that I needed to get it together so I could go out there and play.”

Like all college athletes must do, Ortiz adjusted to the higher level of competition. Ortiz has always been a very good athlete, it’s what allowed her to play both basketball and volleyball at a high level in high school, it’s what afforded her the opportunity to play volleyball collegiately even though it may not have been her primary sport growing up. Where Ortiz feels like she’s grown the most though is in her understanding of the game. Wanting to learn the game is part of the reason she chose volleyball, she felt like she had so much to improve upon. The pace of the game and the commitment it takes is something Ortiz has fallen in love with.

“I feel like I was good at volleyball initially just because I was so athletic,” Ortiz said. “I definitely feel now that I understand the game at a whole new level than I did before and I just feel it’s been a growing experience for me as a player and person as well.”

Ortiz had a very good season for the Rattlers in 2021, she led the team in kills with 262, had the second most blocks on the team with 94 and was the team’s leading scorer with 328.5 points last season. Ortiz’s success for the Rattlers has earned her the opportunity to continue playing volleyball at Southwestern Christian University in Bethany, Oklahoma in 2022 and beyond.

“I’m looking forward to the volleyball aspect to see how it changes from a JUCO to a four year,” Ortiz said. “I want to see how things are different at this level.”

Ortiz will still have three years of eligibility remaining when arriving at SCU even though she played two years at Otero, as the Spring 2021 season did not count against her eligibility. One of the things Ortiz has enjoyed most about her college experience is getting out of her comfort zone and experiencing different things and seeing places that she otherwise would not be able to if not for the college travel. At SCU she’s excited to continue expanding her horizons and building herself up as a volleyball player and person.

Ortiz is going to major in sports management and administration with the goal of becoming a director of operations for a college team in the future. Ortiz is not quite sure how her path to attaining that goal will look quite yet, but she has three years of college volleyball left and plenty of time to figure out what her future is going to look like. For now she’s excited to make the jump to a four year university and thrilled to continue developing as a player on the volleyball court.