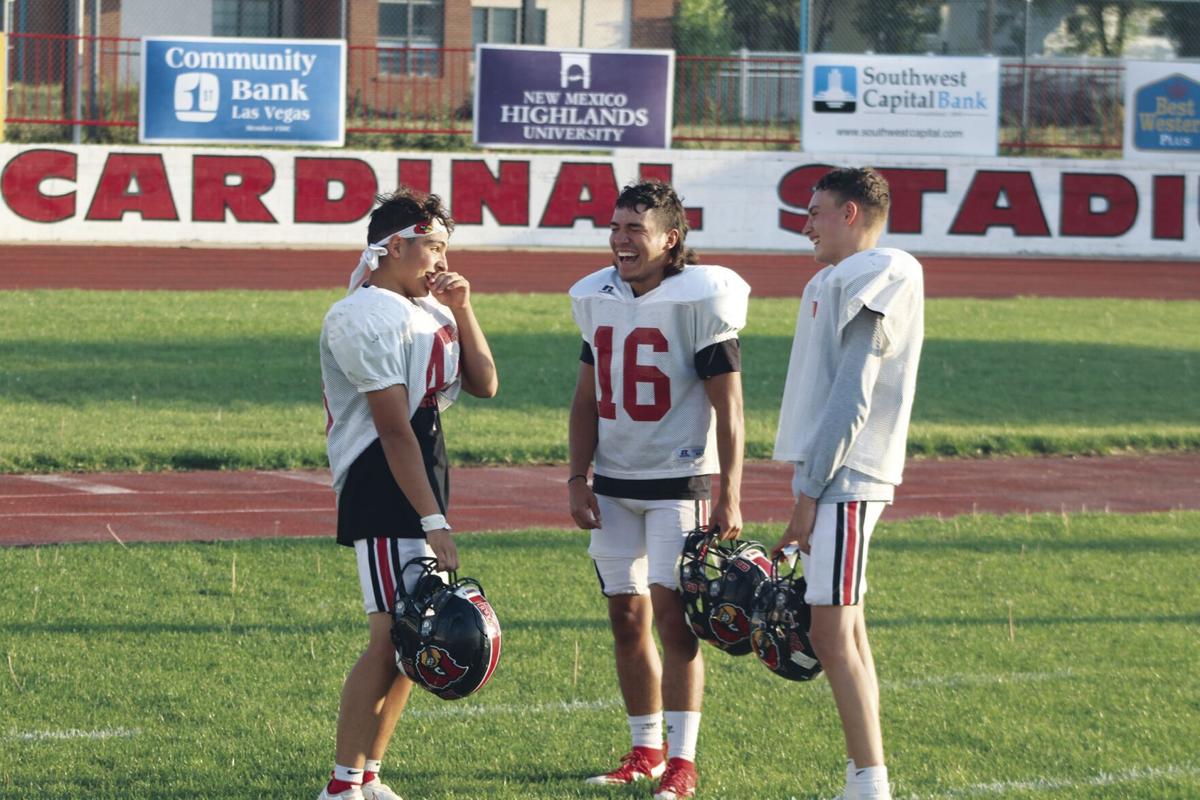 The oldest brother Mathew (middle) is enjoying the time he has on the gridiron with his youngest brothers, the twins Jesse James (left) and Nathaniel (right). With all three playing key roles in the offense it’s not uncommon to see all of the brothers on the field together, something their entire family has enjoyed in 2021. 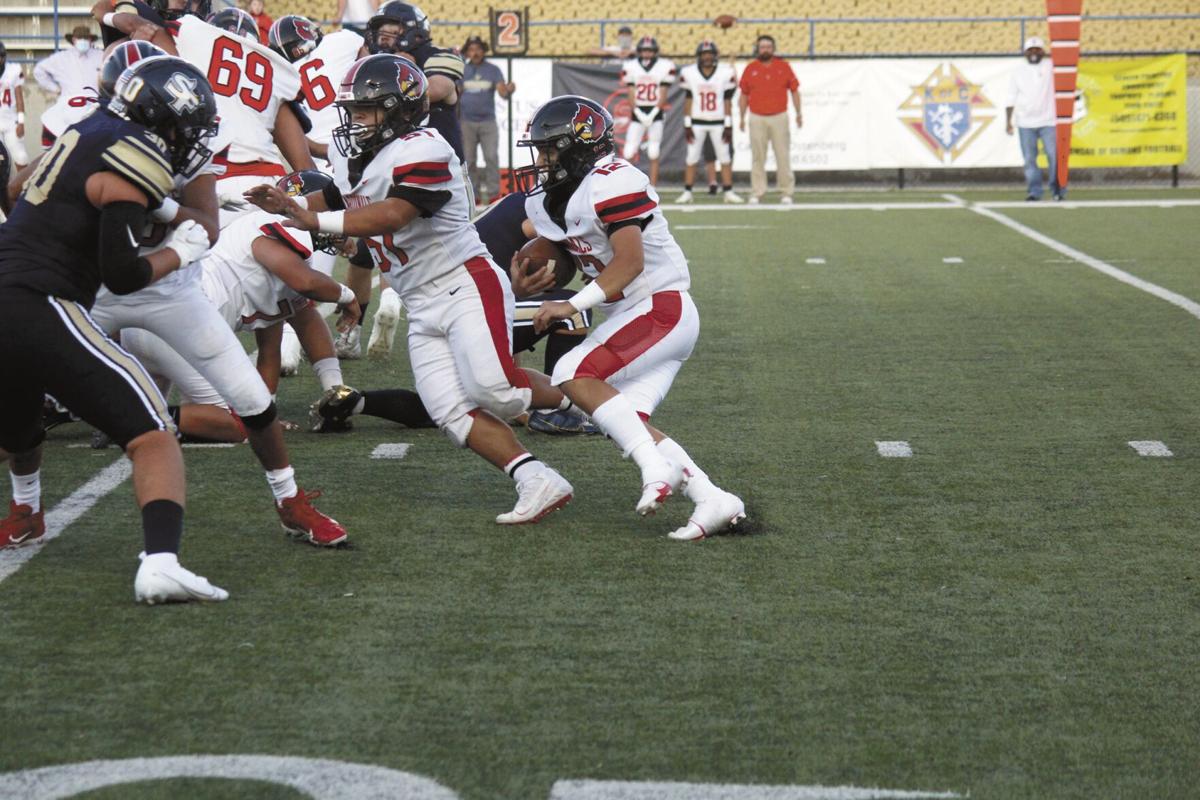 Jesse James Gonzales searches for a hole in the defense in his first varsity game against Santa Fe high in week one. Jesse James is the team’s second leading rusher with 366 yards, and has scored two touchdowns on the season. 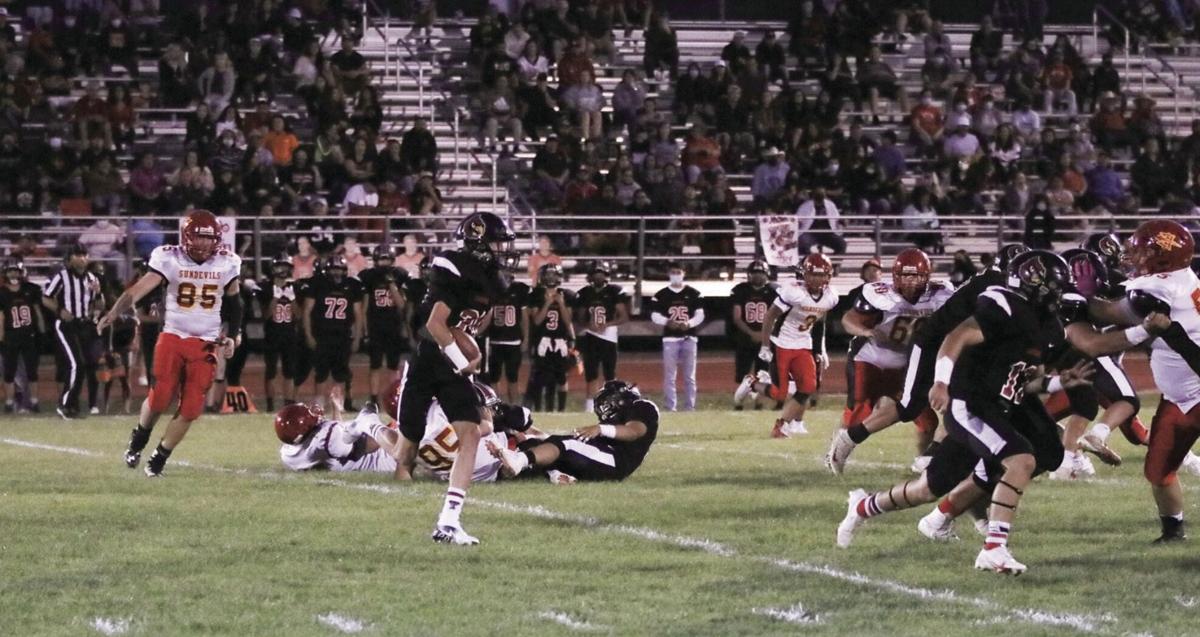 Nathaniel Gonzales scored his first varsity touchdown against Española Valley on a 43 yard connection from his older brother Mathew. It was the first touchdown of the season involving two of the brothers. 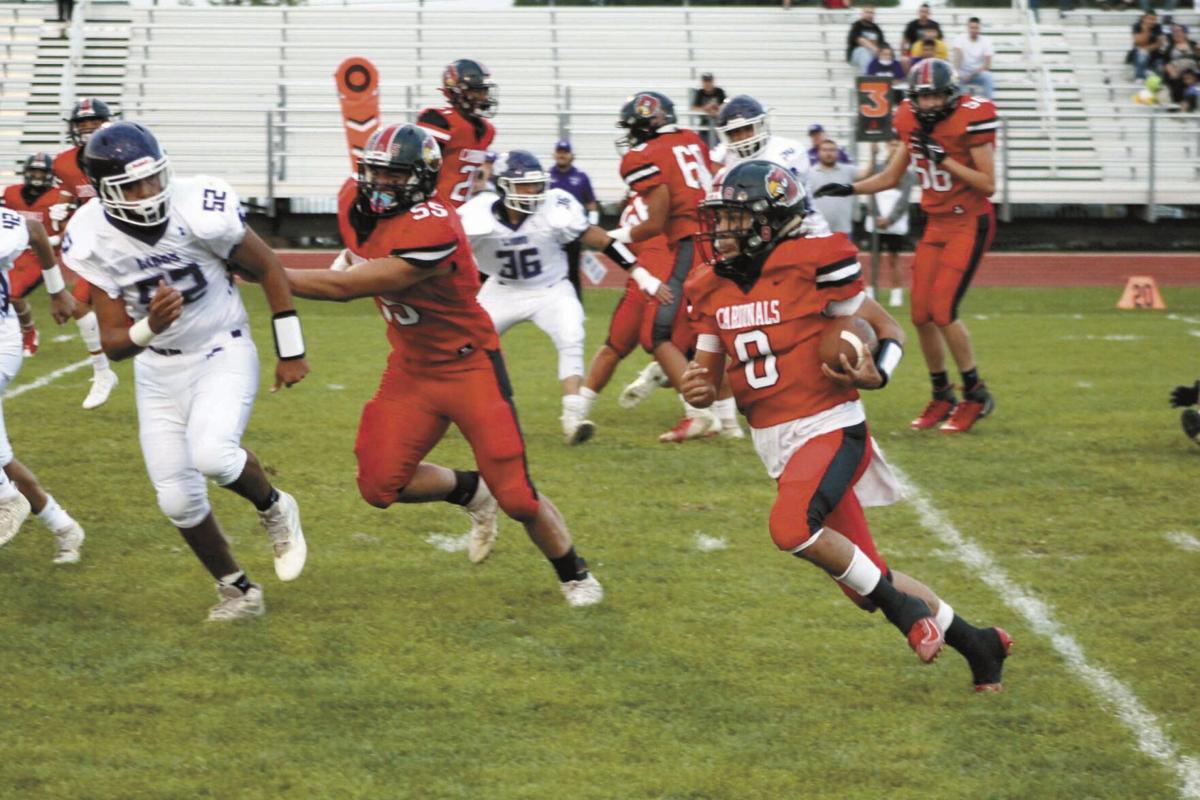 Mathew Gonzales is the team’s leader in rushing yards, passing yards and touchdowns through six games.

Anyone who has been to a Robertson High School football game, or has followed the Cardinals has probably seen or heard the last name Gonzales quite a bit. That is because there is not one, not two, but three Gonzales’ that play major roles for the Cardinals. Senior quarterback Mathew Gonzales is one of the key leaders of the team, and freshmen twin younger brothers Jesse James and Nathaniel Gonzales at the running back and wide receiver positions help compliment their experienced big brother. For Mathew, having a good season was expected, perhaps even demanded. But neither Mathew, the coaches or even the twins thought before the season started that they would get to be key players on the field for the varsity team this year. But now that this is the case, the Gonzales family is enjoying the family affair that takes place every time the Cardinals take the field.

“The Gonzales’ football IQ is high, even the freshmen Jesse and Nathaniel,” head coach Leroy Gonzalez said. “That’s one thing about all the Gonzales boys, they’ve been here, they’ve been through this system… Those guys are competitive, they want to win.”

It’s not just that Jesse James and Nathaniel are on the field, but their positions are complementary to Mathew’s and crucial to his and the team’s success as well. Jesse James has become the Cardinals featured running back and is often found right next to Mathew in the backfield before the ball is snapped. Nathaniel is part of a talented receiving group, and while he’s not a starter, he’s been on the field quite often during the first six games. There have been several instances where all three are on the field together for a touchdown. Those are the moments the brothers like the most.

One moment where the brothers’ chemistry was evident was against Española Valley during the homecoming game. As soon as the play call came in, they already knew what was coming.

“Coach called the formation we were in,” Mathew said. “I went into the huddle and (Nathaniel) came back and I said ‘Nate, here you go, here’s your play.’ I knew that play was there because it had been perfect in practice all week, so once I heard the play call I told him, ‘you better get in.’ (Nathaniel) got so excited that he even lined up wrong at first.”

That play call, after they got everyone lined up correctly, resulted in a 43-yard touchdown from Mathew to Nathaniel, the first of Nathaniel’s varsity career.

Scoring touchdowns is not the only thing the brothers do together. In fact, they do just about everything together. Mathew said that his brothers essentially never leave his sight, and he has quite the perspective on their current dynamic.

“I tell them they’re my built-in best friends,” Mathew said. “I bring them everywhere with me, I told my mom it’s like I’m their dad because I’m always taking care of them now that they’re in high school. I’m watching them, giving them money and everything.”

For Mathew, this year comes with high expectations all the way around. He’s a senior quarterback for one of the most successful programs in 3A football over the last decade.

“Mathew is a team leader,” Leroy Gonzalez said. “Wherever Mathew goes, that’s where the Cardinals go. He’s the quarterback and strong safety. He’s a real vocal leader and kids follow him.”

The standards when you put on the black Cardinal helmet are high because of what it has meant over the last several years. Mathew’s internal standards are also high, not just for himself, but for the team. He wants a state championship. He got a taste of one in 2013 when he was the Cardinals team manager, a team that featured his oldest brother, James Gonzales. To date James is the only one of the five Gonzales boys that has a state championship ring. With the three brothers together now, their eyes are on evening up the score with James.

“It makes me want to win so bad because (James) talks so much smack about how he’s the only state champ in the house,” Mathew said. “I told him last night on the phone that me and the twins are going to win state this year, that’s our goal.”

The Cardinals are currently ranked fourth in the NMOT coaches’ poll, but with the Nos. 1, 2 and 5 teams in their district and still on the schedule, they will learn a lot about themselves and their potential competition for a blue trophy in the month of October. Whether or not they accomplish their ultimate goal of a state championship, they realize that what the three of them are able to do on the field is special, not just for them, but for the entire family.

“It’s so cool because you can see how happy it makes my mom and dad,” Mathew said. “To see their three youngest boys playing football together.”

For the Gonzales trio their time on the field is limited, as there are only four games remaining in the regular season, then it’s playoff time. The goal is a state championship, but the first task at hand is a district championship. As Mathew put it, in this district it’s “big boy football.” So he’s been preparing his younger brothers as best he can for the challenges that lie ahead. It starts Friday night when they travel to Santa Fe Indian School to take on the Braves, then the daunting trio of games against No. 2 Raton, No. 1 St. Michael’s and archrival No. 5 West Las Vegas to close out the season.