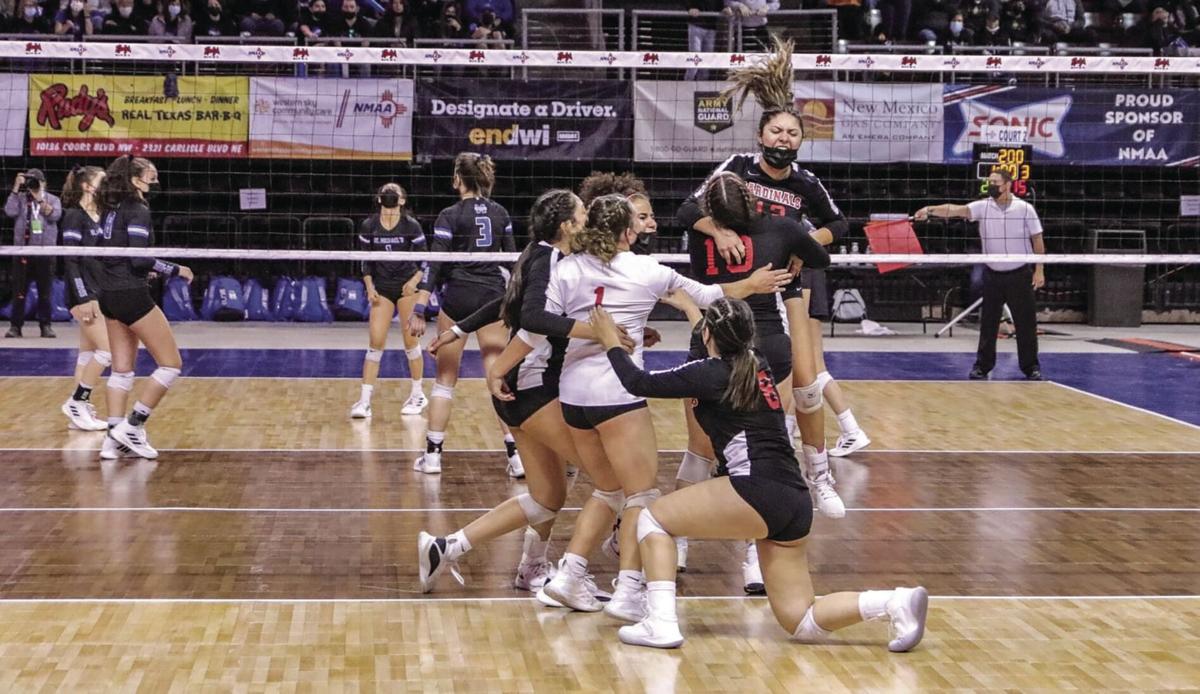 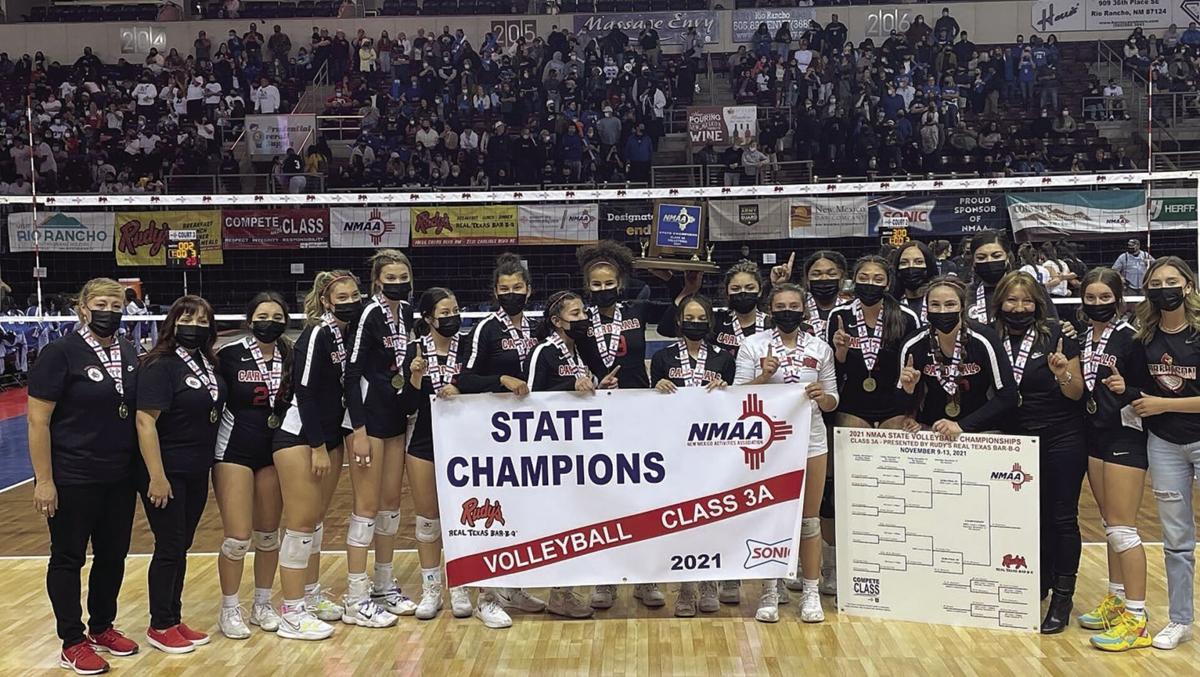 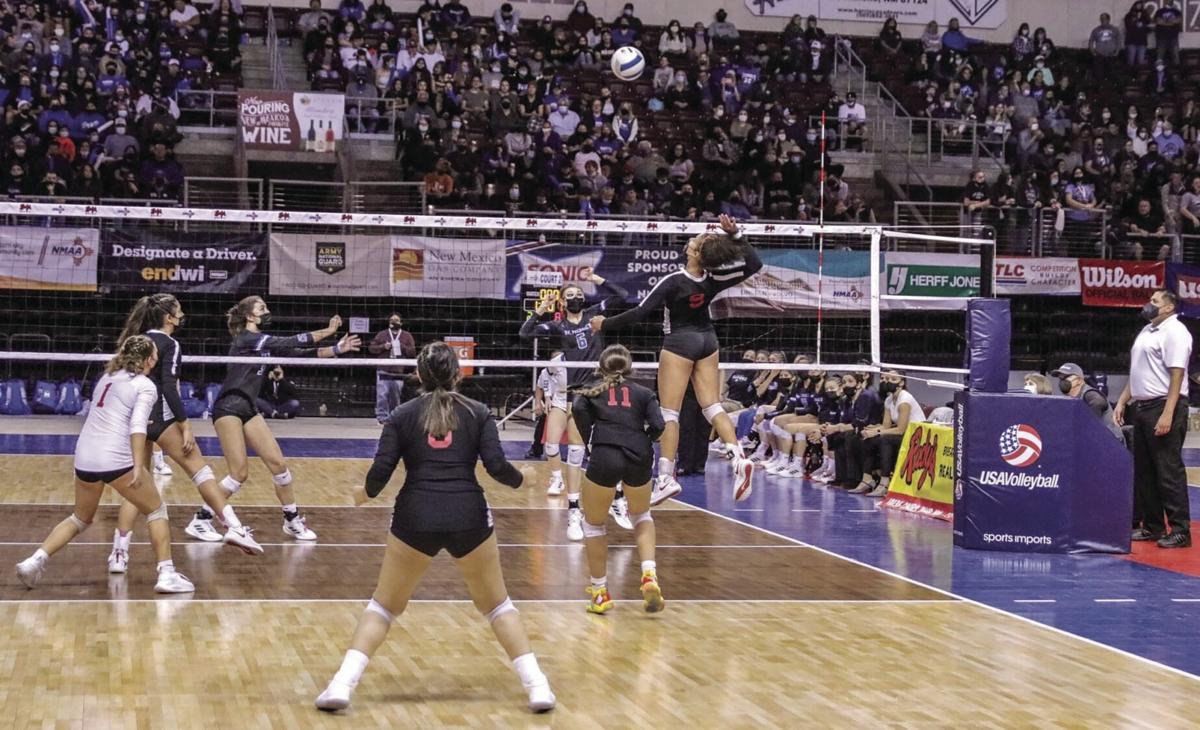 Jayden Jenkins (9) goes up for the kill during the state championship game agaisnt St. Michael’s. Jenkins played her best volleyball at the end of the season, helping the Cardinal to their second state title in as many seasons. 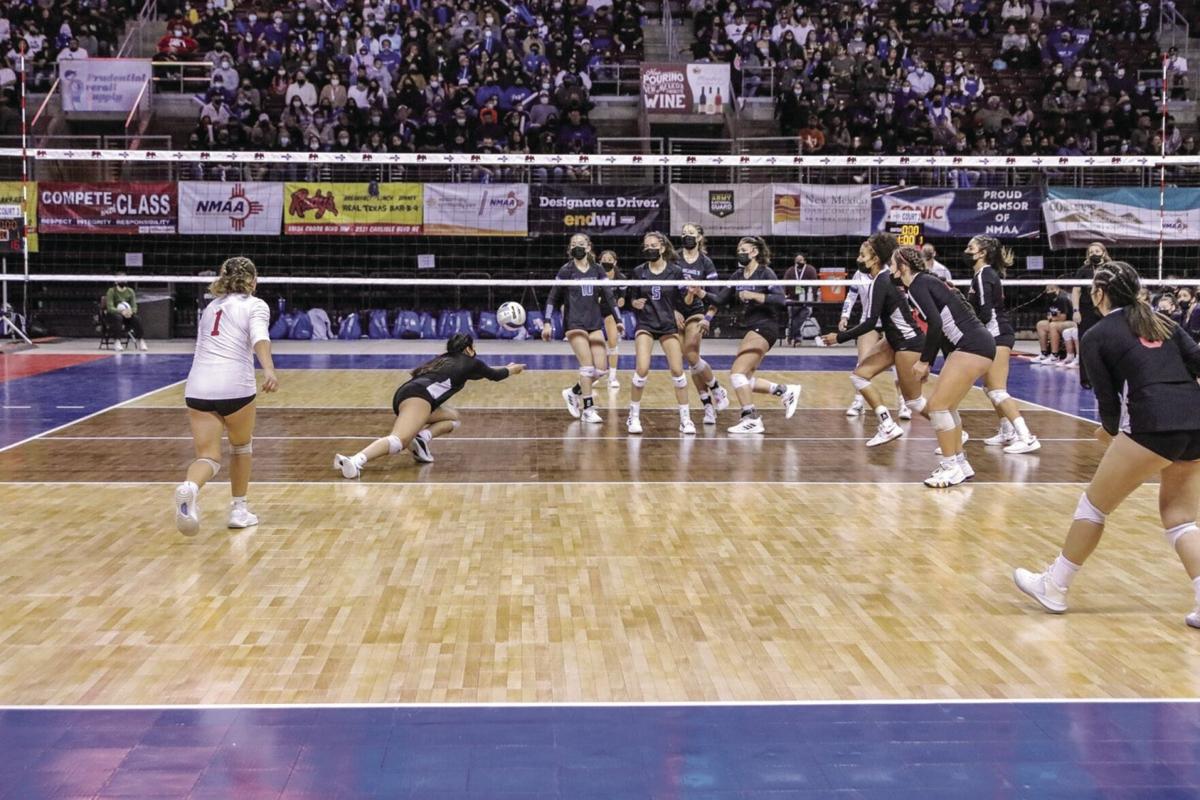 Intense. If there was one word to describe the Robertson Cardinals volleyball team over the weekend, it would be that. Robertson played with more intensity on Friday and Saturday than they did at any point during the season, and they walked away with the state championship for the second time in as many seasons played.

“I’m so excited for the team and I couldn’t ask for anything more,” head coach Vanessa Gonzales said. “Not only to be state champs, but to be 27-0 is just outstanding!”

The intensity the Cardinals came into the weekend with was clear even before they played their first game Friday afternoon. On Thursday, Gonzales believed that her team had their best practice of the season. It was clear that this team, with seven players remaining from the 2019 championship team, was ready for the moment, and they showed it right away.

It was evident in the second set of their first-round game against East Mountain, as it seemed like during every point there were one, or multiple, Robertson players diving on the floor to keep the ball alive, even as the team was already up a set and dominating the second. That intensity was not always present during the regular season but was on full display over the weekend.

“I think it was just all of us working together,” senior setter Mikaella Sena said. “Our passers just working together, our hitters were on point, we were all just connecting, and our energy was really high this weekend.”

It was a season defined by dominance for the Cardinals, and there was no shortage of that throughout the state tournament. The dominance starts with junior outside hitter Jaylee Gonzales. She is the best player in 3A, and perhaps in all of New Mexico. All season Robertson opponents knew where the ball was going, they knew what Gonzales could do, but it did not mean they could stop her. The last set of the season was the perfect example of that. After going down 7-2, the Cardinals went on a 16-0 run to seize control of the set, and all but win the match right there. Gonzales was, as she usually is, the centerpiece of the attack, accumulating nine blocks and two kills in the 16-0 run. It was no secret the ball was going to Gonzales on the left side, but there was nothing that the Lady Horsemen could do about it.

While Gonzales was the spearhead of the attack, she was not one of the players who had already claimed a blue trophy. There were seven seniors on Saturday who walked out of the Rio Rancho Events Center with their second volleyball state championship. Three of the most impactful were outside hitters Jenkins and Stella Garcia, along with setter Sena. Those three seniors seemed to have saved their best for last, playing their best volleyball individually over the weekend, which played no small part in the team playing their best volleyball of the season.

It was almost as if the 23 games before the playoffs began were just the preseason and that this is what they had been waiting all season for. From Friday afternoon, where the environment felt like that of a summer tournament with multiple games going on at Rio Rancho High School, to Saturday night where the 2A, 3A and 5A state championships all took place simultaneously in front of a boisterous crowd at the Rio Rancho Event Center. Regardless of the moment or the opponent, the Cardinals just seemed ready to overwhelm their opponent at every turn. That senior experience paid off with another blue trophy.

“I had been telling people all along that even though we were undefeated I still didn’t feel that we hit our peak yet,” Gonzales said. “But we sure did (Saturday) we were at the top of our game.”

For seven seniors on the team, it’s 31 wins in a row dating back to 2019, but this year was special, this team is special. It’s not only that they went undefeated, but they were almost never threatened along the way, being taken to five sets just once this season, in a tournament at Santa Fe High School on Sept. 11. The arsenal of attacking options proved to be too much for just about everybody.

In the preseason, one thing coach Gonzales talked about was how athletic this team is, referencing how most of the girls on the team play, and excel at, multiple sports. That athleticism was on full display over the weekend.

“We work so well together,” Stella Garcia said. “The feeling we get from each other, working as a team is just incredible.”

If this season was played back ten more times, it’s still hard to imagine anybody on the schedule beating this team, that’s how dominant these ladies were over their competition. It’s beyond difficult to go undefeated, especially over a 27-game season, but the Cardinals made it look easy.

During the course of the regular season, they played six of the 12 playoff teams in 3A and beat them all. They played the No. 1 seed in the 4A bracket, Hope Christian, beating them in straight sets. They even played the 5A No. 5 seed Los Lunas twice this year, beating them both times and dropping just one set in the two matches. They played about as tough a schedule as they reasonably could, and they still went undefeated. That might be the most impressive thing. This team was dominant, and this team is special. That’s how the 2021 Cardinals are going to be remembered, as one of the most dominant teams ever seen in Las Vegas.