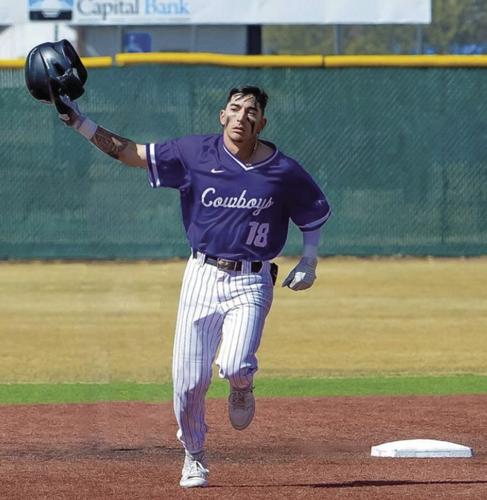 Estevan De La O tips his helmet to the dugout while rounding the bases during last weekend’s series against Regis. De La O’s .433 average in conference play is good for sixth in the RMAC. 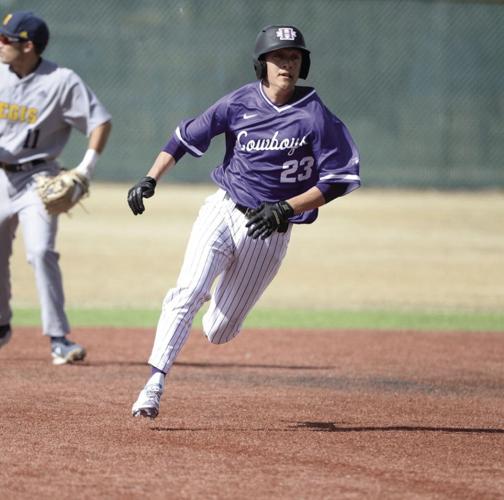 Lubby Marrujo rounds the bases in last weekend’s series against Regis. Marrujo is tied for the RMAC lead in stolen bases with five in conference play, and has yet to be caught stealing this season.

After a rough start to conference play, the NMHU Cowboys baseball team is starting to find their groove, especially with the bats. Over the weekend against Regis the Cowboys offense exploded, churning out 52 runs in four games, including 36 in a doubleheader sweep on Saturday afternoon. It’s the type of offensive baseball that head coach Shannon Hunt has believed his team is capable of, and now, midway through conference play they’re starting to break out.

I think that we’ve broken through a little bit,” Hunt said. “They’ve been showing signs of breaking out as a hitting team and then all of a sudden ‘boom, and they showed up.’”

While the bats have gotten going, the area of the team that’s most improved from the start of the season is their defense. Early in the season the Cowboys were an error-ridden team that couldn’t stay out of their own way. As the season has progressed the Cowboys have gotten better with their gloves. They have some young players who have become regulars in the field like freshman shortstop Lubby Marrujo, freshman outfielder Jose Ayala and sophomore outfielder Allan Salas. As a defensive team the Cowboys have made quite a bit of progress, and currently have turned the second most double plays in RMAC play.

“We were on pace to break the all-time all of baseball errors record with how many we committed,” Hunt said. “But we work on it every day and I think it’s just a matter of us being relaxed and trusting their abilities, and they’ve been really good, the kids work hard.”

The goal is the RMAC tournament at the end of the regular season. The Cowboys are looking forward to the potential of some postseason baseball. The top six teams in the conference make the tournament and currently the Cowboys are sitting in seventh, just percentage points behind Colorado Christian in the sixth spot, and only one game behind Colorado School of Mines for fifth. If the Cowboys are able to play .500 baseball or better the rest of the way, then that would probably be enough to put them in the conference tournament. What coach Hunt most wants to see from this group is their fight, and as we approach the second half of conference play he is confident in their ability to do just that.

“My guys never quit, they never fold up their tent,” Hunt said. “We just don’t, we’re always going to be a thorn in the side of teams, you don’t want to play us if you can avoid it because we’re going to be the team that’s just not going to go away.”