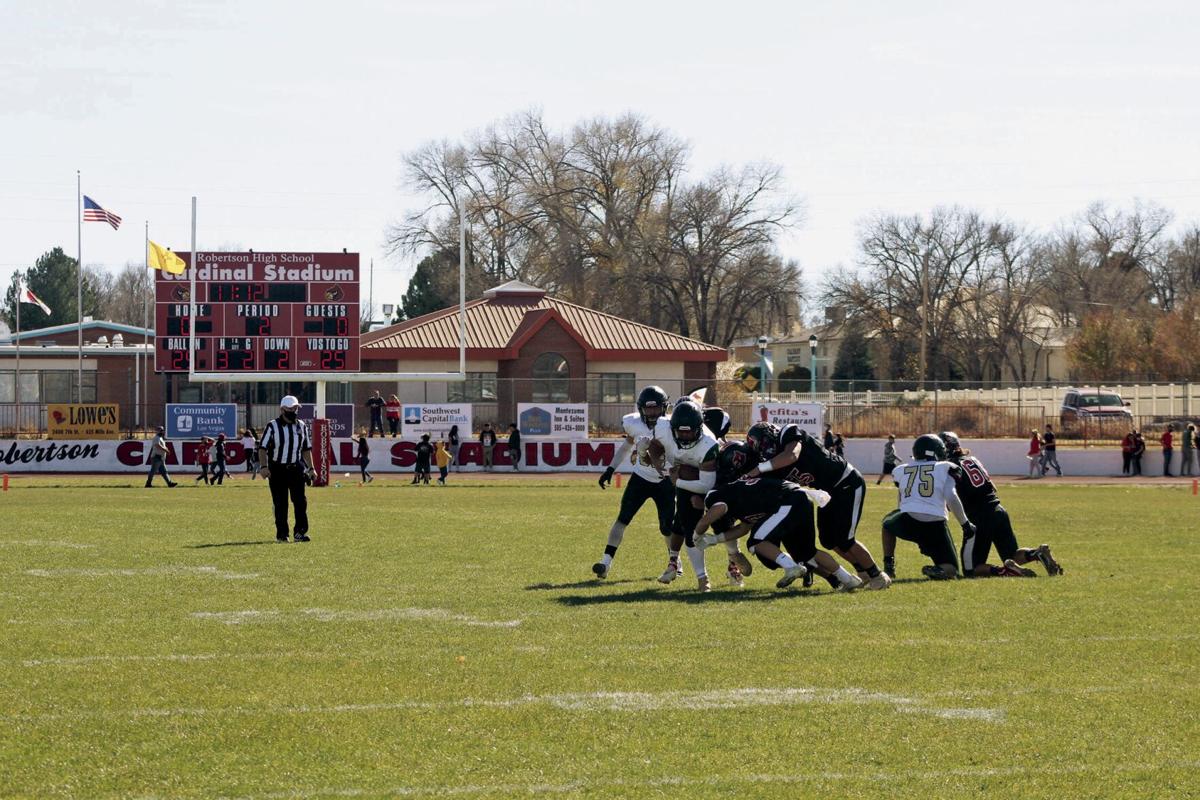 The Cardinal defense kept a potent Dons offense bottled up throughout the afternoon, holding the dynamic duo of Damian Gallegos and CJ Perea to just one touchdown in their final game of the season. 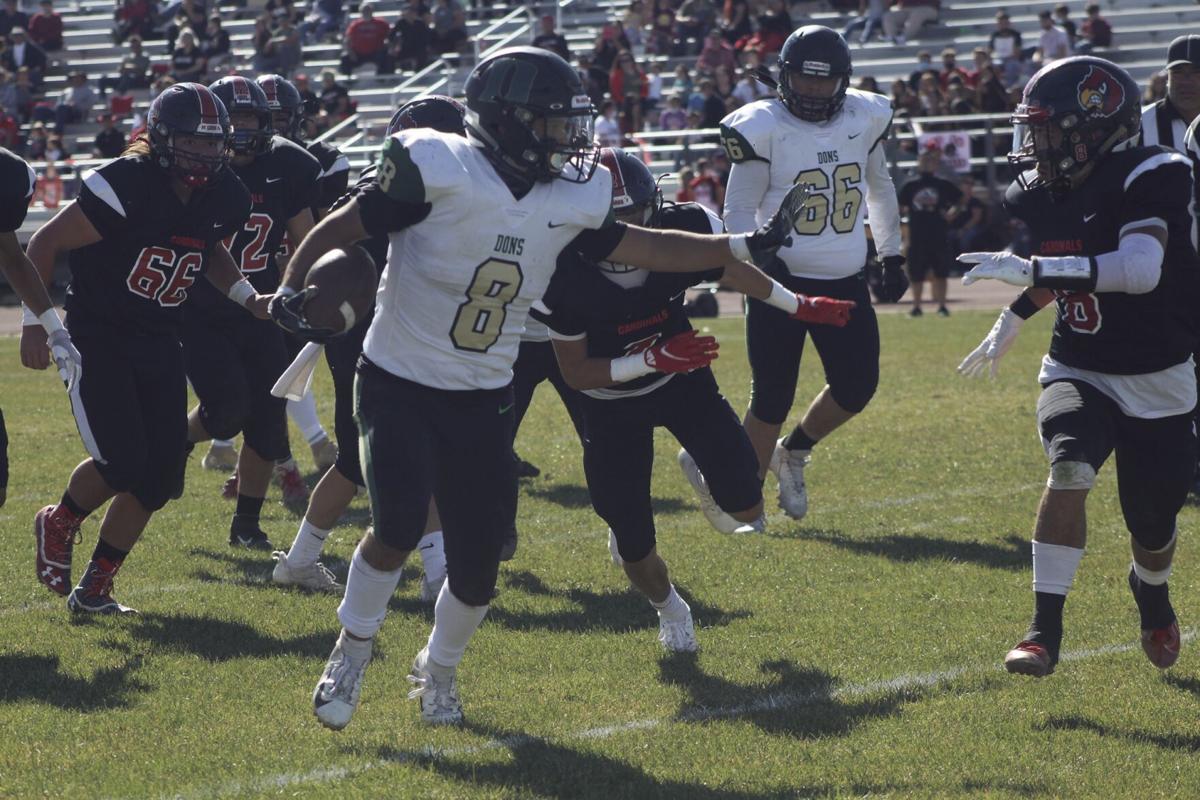 Damian Gallegos (8) scored the Dons lone touchdown in his final high school football game. Gallegos finished the season with 38 total touchdowns, the most by any player in New Mexico so far this season. 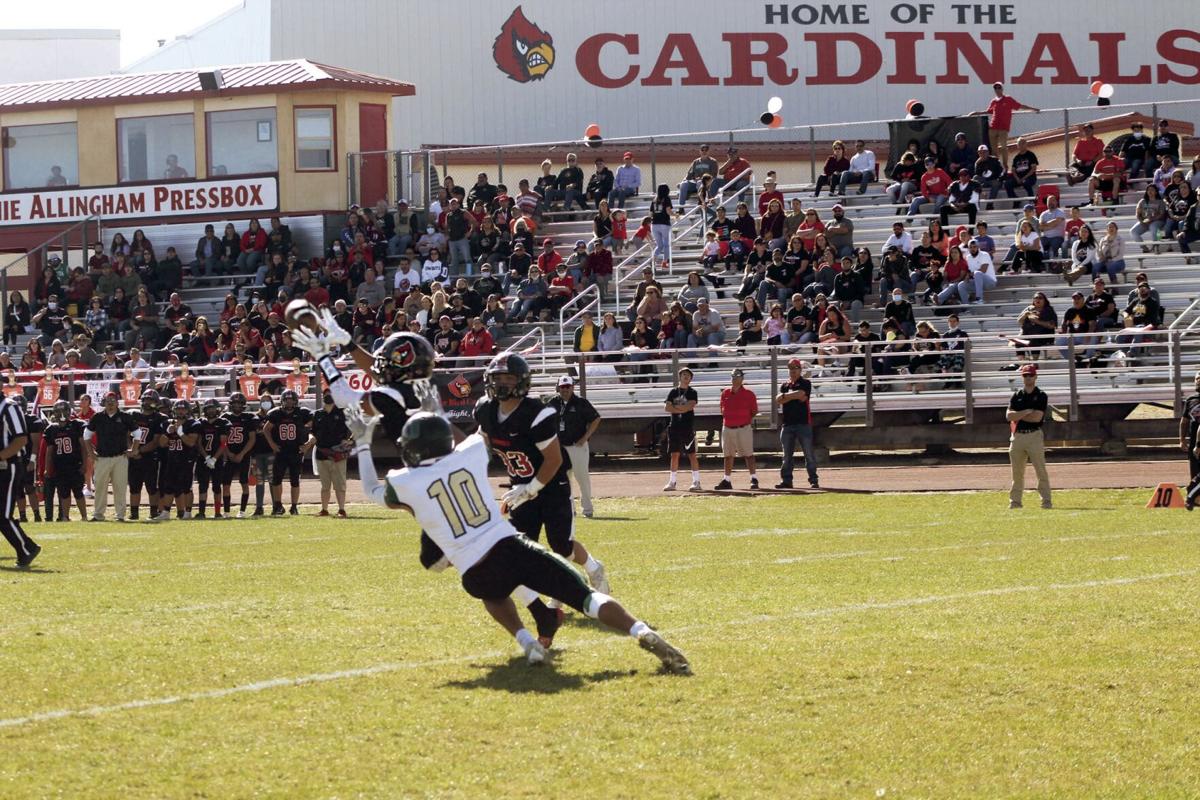 Mathew Gonzales intecepts a pass in the end zone, one which he returned over 100 yards for a touchdown in the second quarter of Saturday’s playoff game. The touchdown gave the Cardinals a lead they would never relinquish. 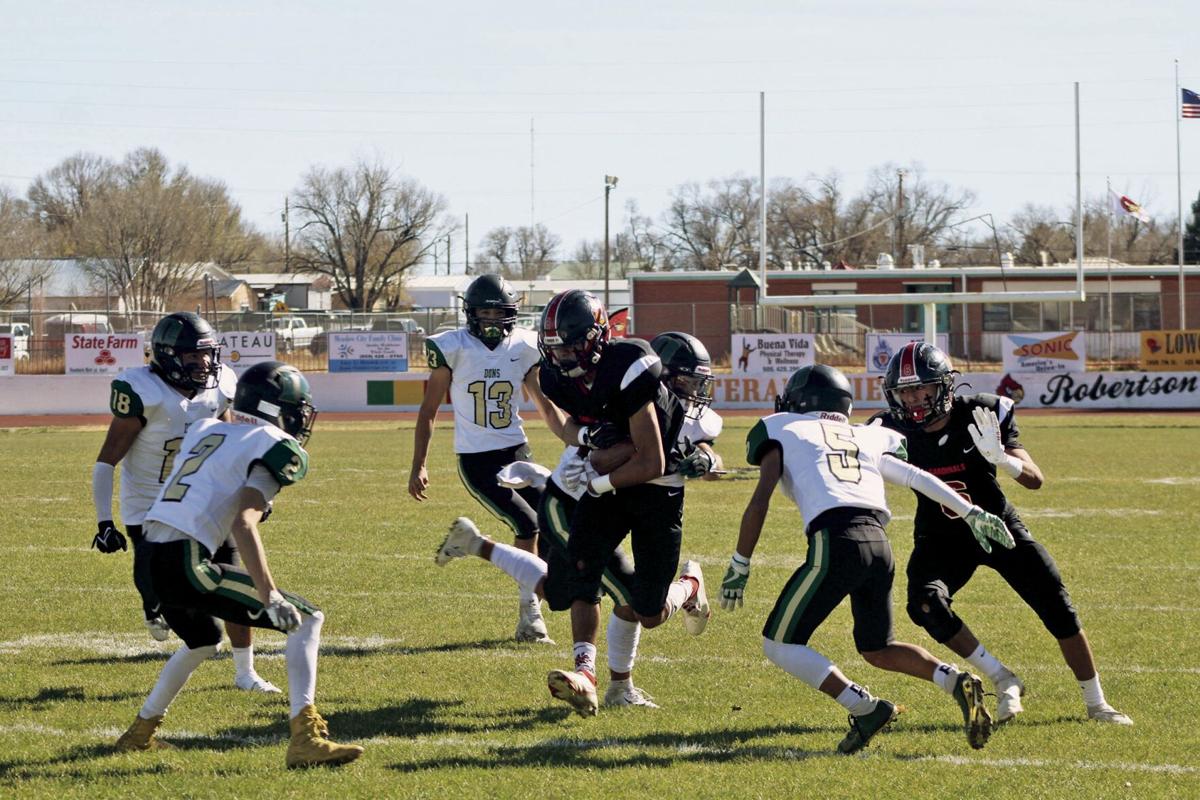 While the Cardinals offense did not hit the big plays in this game the way they did two weeks prior, they were able to methodically and effectively move the ball against a tough Dons defense who did make things dificult throughout the game.

It’s hard enough to beat a good team one time, but to beat them twice is something that many coaches will say is beyond difficult. That’s just what the Robertson Cardinals football team had to do, though, as their road to the Class 3A semifinals included two wins over their archrival, the West Las Vegas Dons. When the brackets were announced a little over two weeks ago, this was a possible game that was circled, especially given the excitement that the first contest provided in a 40-27 Cardinals victory. The second time around it was more of a defensive struggle, one that Robertson head coach Leroy Gonzalez was fond of after the game.

After giving up 27 points in their Oct. 30 contest, the Cardinals needed to make some adjustments on defense. They kept getting burned deep down the field, but this time they were not allowing that to happen. It started at the line of scrimmage, where the Cardinals defensive line made the shift from a three-man defensive line to a four-man front, which proved to be highly effective. They terrorized the West Las Vegas backfield, featuring 3A’s leading passer in freshman quarterback CJ Perea, and third-leading rusher in senior Damian Gallegos. Gallegos and Perea were one of the most lethal combinations in the state this season, as Gallegos also leads the state in total touchdowns, with 38. It makes what the Cardinal defense did that much more impressive.

“I think our defense played another good game,” Gonzalez said. “We adjusted to the long passes, got pressure on CJ, and he made some great passes with guys all over him, but all in all we’re going to the next round.”

While this was a different game than the shootout that took place at the end of October, one thing remained the same, and that was senior quarterback and safety Mathew Gonzales being the best player on the field. While the offense did struggle out of the gate, failing twice to score in the red zone on the team’s first two possessions, it did not stop Gonzales from completely turning the game on its head at the start of the second quarter.

It was third and goal for the Dons with the game still scoreless, and it appeared the Dons were going to take the lead when Mat Gonzales happened. A pass to the endzone was intercepted just inside the goal line by Gonzales, and once the ball was in his hands, he did what he usually does, make things happen.

“I took a step outside and then I saw the inside guy run a hook in my zone and once I saw (the quarterback) release I was able to get to the right spot and timed it perfectly,” Gonzales said. “I knew if I could beat one of their dudes that was out there on the sideline that it was going to be six, and once I beat him that was it.”

Gonzales returned the interception over 100 yards for a touchdown. It was the play the Cardinals needed to jumpstart themselves after some missed opportunities early in the game. While the Cardinals defense made their adjustments to the Dons, the Dons defense also made their adjustments, and they were effective. They had to figure out how to contain Gonzales’ scrambling ability, and for the most part they did a good job. They were able to keep Gonzales in the pocket, not let him get outside and they never allowed him to hit the big plays with his legs. The Cardinals made the adjustment, though, without the big plays they knew they would have to methodically go down the field if they wanted to score, and they were able to do that as the game continued.

The story of this game was the Cardinals defense. The 100+ yard interception returned for a touchdown was one of two interceptions on the day for Gonzales. The second one came in the fourth quarter, and he returned it for 39 yards as he came dangerously close to another pick six. Junior cornerback Kenneth Montoya also reeled in an acrobatic interception on the sideline in the third quarter. It was clear the Cardinal defensive backs took the first game personally and were up to the challenge on Saturday. Aside from one drive in the second quarter, powered by a 54-yard Perea to Gallegos connection which led to a touchdown a few plays later, the Cardinal defense was all but perfect.

As great as the defensive backs played, the front seven might have been even better. Their dominance at the line of scrimmage was clear from the outset, as on the game’s first play junior linebacker Ace Gonzalez streaked into the backfield to help sack Perea. Gonzalez was one of five players who finished the game with more than 12 tackles, leading a linebacking group, along with Adrian Rivera and Mateo Contreras, who bottled up the Dons potent offense and walked off the field with a semifinal date with Socorro set.

“We knew that we controlled the line of scrimmage last time and I knew we were going to do that again,” Gonzalez said. “All in all I think it was a team game.”

Up next for the Cardinals is the No. 2 seed Socorro, who will be traveling to Las Vegas on Saturday Nov. 20. Socorro punched their ticket to the semifinals with a 41-0 victory over Dexter in the quarterfinals. It will be the two schools’ first postseason matchup since 2009, one the Warriors won 7-3. Given the potency of the two offenses, this contest figures to be much higher scoring. Kickoff is set for 1 p.m. at Cardinal Stadium, with a spot in the state championship on the line.