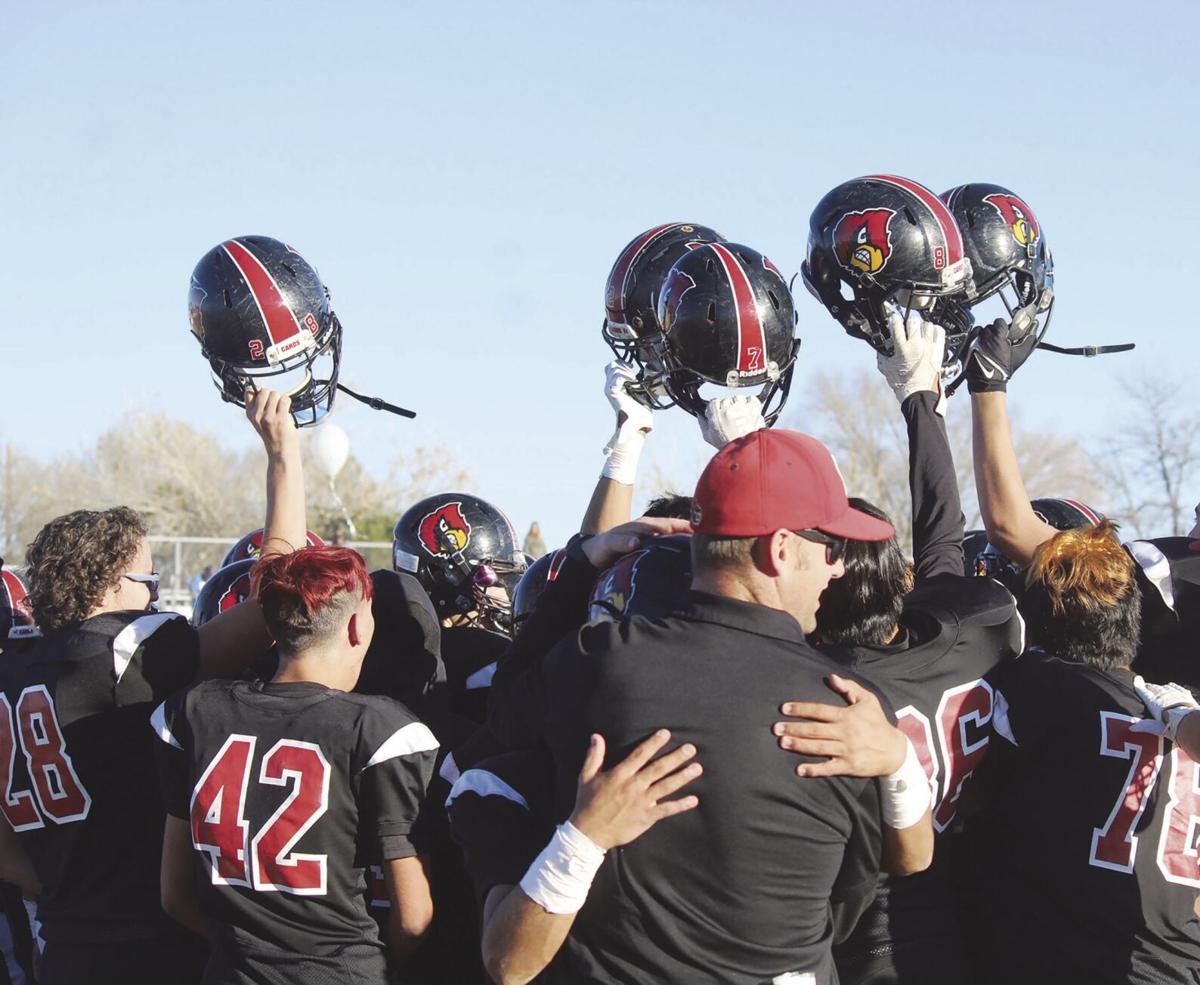 The Robertson High School football team celebrates after winning the Class 3A state championship 28-7 over St. Michael’s High School last Saturday. It is the first state title for the Cardinals since 2013. 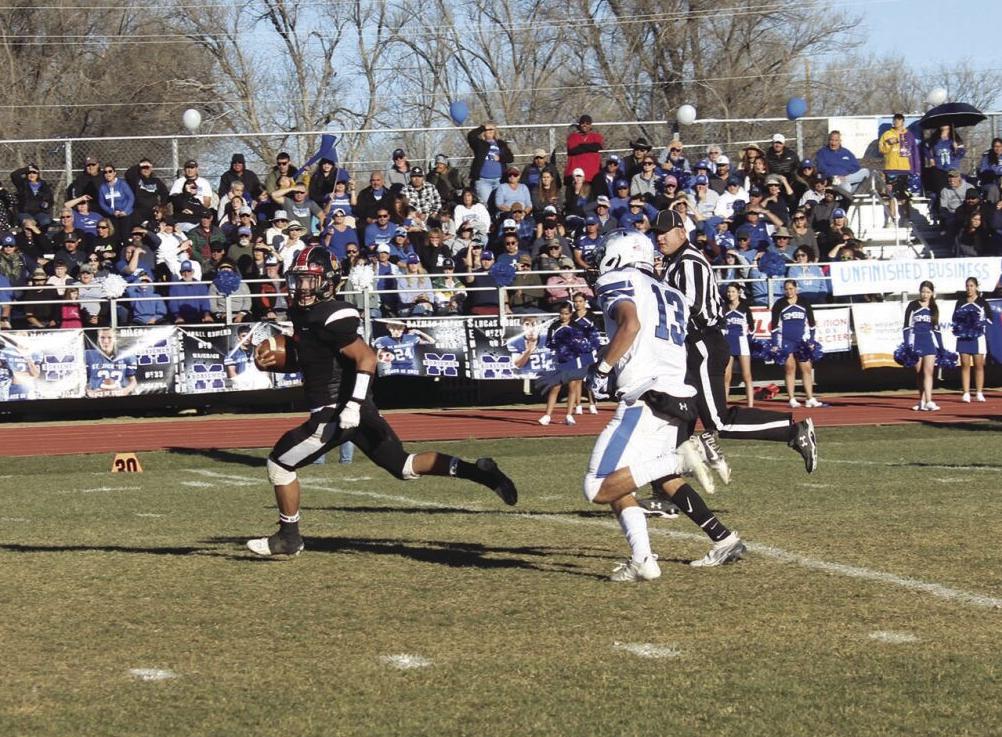 Mathew Gonzales runs away from the Horsemen defense on his way to a 73-yard touchdown in the fourth quarter of the state championship game. Gonzales would finish the day with 301 rushing yards, capping off a stellar high school football career.

The Robertson High School football team celebrates after winning the Class 3A state championship 28-7 over St. Michael’s High School last Saturday. It is the first state title for the Cardinals since 2013.

Mathew Gonzales runs away from the Horsemen defense on his way to a 73-yard touchdown in the fourth quarter of the state championship game. Gonzales would finish the day with 301 rushing yards, capping off a stellar high school football career.

In sports, coaches always talk about peaking at the right time. It’s a way of saying that you want to be playing your best at the end of the season. That’s the story of the 2021 Robertson Cardinals football team, one that peaked at the right time on their way to a state championship. Actually, if you ask head coach Leroy Gonzalez he would tell you that his team had yet to hit its peak.

“I wish we had five more games because we haven’t even peaked yet,” Gonzalez said. “We didn’t play last year and we’re just finding our rhythm now.”

It’s hard to doubt Gonzalez’s sentiment. The Cardinals seemed to get better with every game, and on Saturday afternoon they left no doubt about who the best football team was in 3A with an emphatic 28-7 victory over the St. Michael’s Horsemen.

The Cardinals were not dominant in the regular season, sporting a solid 8-2 record, but after their second loss the Cardinals found another gear, one that no opponent could match. They won each of their last six games by double figures on their way to the blue trophy. The Cardinals were a young team, with many starters having never taken a varsity snap prior to week one. For the Cardinals to win the state championship given that is a testament to coach Gonzalez and his staff’s ability to develop not only players, but a culture that promotes winning.

It’s also a testament to their senior quarterback Mathew Gonzales, who was not only the best player on the field for the Cardinals in their late season push but was the leader that the Cardinals needed. His contributions on the field were immense, amassing over 1,700 yards of total offense, 25 touchdowns and eight interceptions over his last six games. But his presence in the huddle and in the locker room was perhaps just as important. Gonzales was one of the few seniors on this Cardinal team and absolutely delivered in his final six games, rushing for 301 yards in the state championship game and ending his career with a blue trophy.

If you talk to coach Gonzalez, you know that line play is a big deal to him. In his mind if you win the line of scrimmage, you will win the game, and more often than not that is the case. Like most areas of the Cardinals were young this year, but the offensive and defensive line showed their youth the most at times this year. Both of their losses were in large part because they could not win the battle up front. Against St. Michael’s, the Cardinals won the battle up front, and no player did more at the line of scrimmage than junior defensive end and offensive tackle Bodie Schlinger.

Going into the year Schlinger was not sure he wanted to play football. In fact, he did not even join the team until after their week one contest, but he made an immediate impact. Schlinger added a level of physicality to the offensive and defensive line which raised everyone’s play. Linemen typically go under the radar, but on Saturday Schlinger made his presence felt, sacking the quarterback three times and playing no small part in the four interceptions the Cardinal defense forced. The Cardinal defense was outstanding, and Schlinger was at the center of it, making plays in a game that he couldn’t have imagined playing in when the season began in August and now he’s a state champion.

“It feels great, I love it and everything it’s amazing,” Schlinger said. “All of this hard work just paid off, everything that we put in, all the hard work paid off.”

The Cardinals are a young team, and this year younger players who had little to no varsity experience entering the season had to step up, the state championship game was no different. Freshman running back Jesse James Gonzales ran for a touchdown, sophomore linebacker Mateo Contreras, who has been one of the best receivers in 3A, was a menace on defense against the Horsemen, even tipping a pass which was subsequently intercepted by junior linebacker Adrian Rivera. Saturday was an all-around team performance. For as good as Mathew Gonzales and junior linebacker Ace Gonzalez, who led the state in tackles, are, this team is state champions because they embody what a team is. Every game they had different players step up, whether it was junior Kenneth Montoya in the passing game or as a defensive back, Rivera establishing himself as a powerful runner, Schlinger and junior defensive lineman Santana Martinez wrecking another team’s offensive line, or anything else, this team never stopped finding ways to win games.

As Leroy Gonzalez said, he doesn’t believe that his team has peaked yet, he thinks their best days could be in front of them, and maybe that is an omen for next season as they will have much of the roster back. For now, though, the Cardinals can enjoy this state championship, and they should. The Cardinals ended the season on a five-game winning streak, and during that streak Mathew Gonzales played some of the best football in the state on both sides of the ball, closing out his high school career on the ultimate high note. After losing four consecutive state championship games from 2015-2018, the Cardinals and coach Gonzalez are back in the winner’s circle, and after the heartbreak of years past there was true joy in this season’s achievement among the players and the coaching staff. Eight years after his first title Gonzalez captured his second as a head coach. This championship cements the legacy of Gonzalez as one of the best coaches in the state, the final five games from Gonzales will be talked about for years to come and will be the standard future great players are measured up against. Minutes after the game, though, none of that mattered as the Cardinals accepted the blue trophy. All that mattered was that they are state champions, and for Robertson players, coaches and fans that is all that matters.

“Holding that blue trophy up and winning the state championship is a dream come true,” Gonzales said.