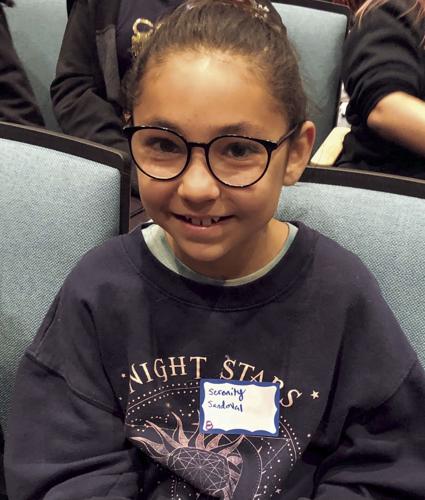 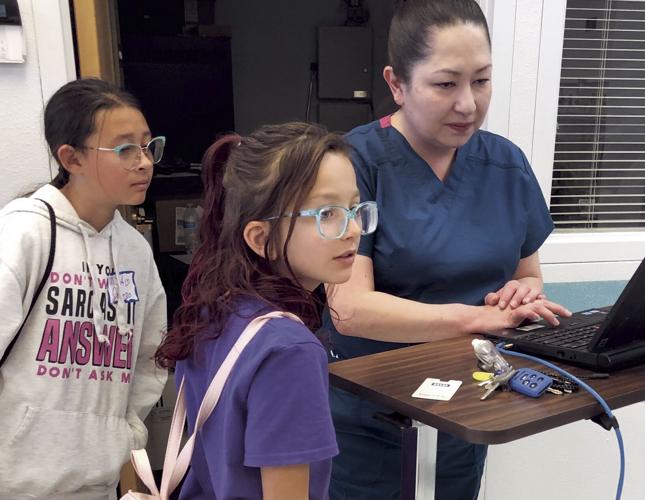 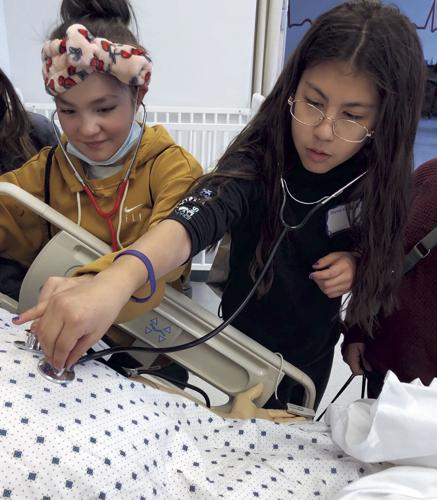 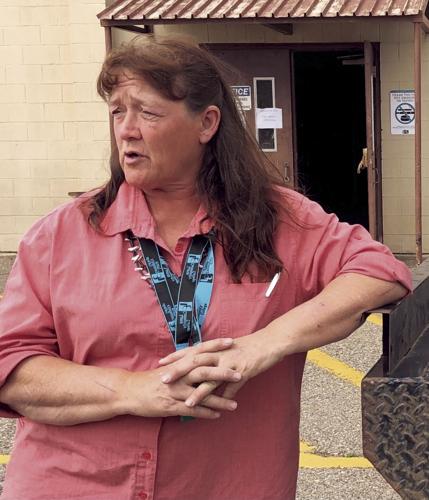 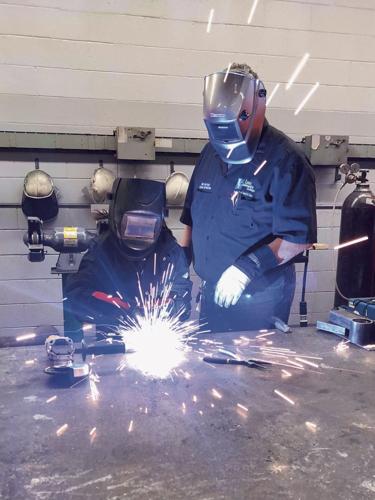 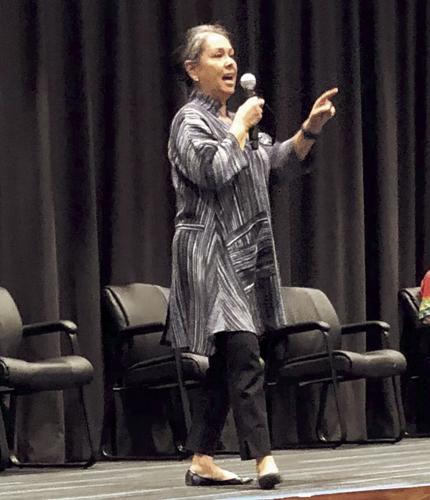 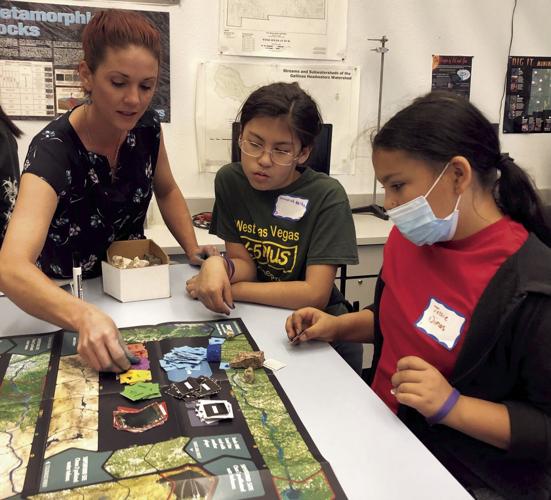 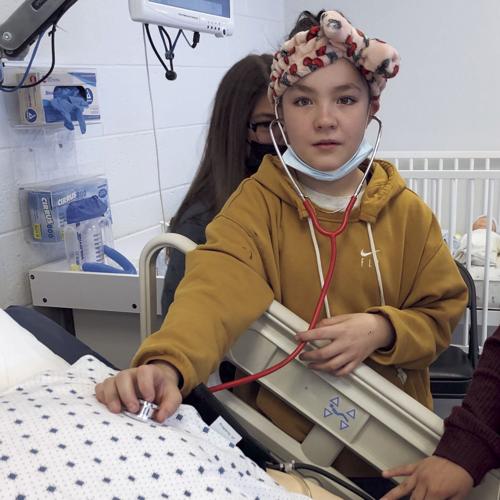 Organized by our American Association of University Women (AAUW), the event was sponsored by the MdN with thanks to their director Raymond Sanchez plus Matthew Cordova and his crew at LCC who facilitated.

Each girl signed in and made a name tag. (They may not have noticed a number from 1-17 at the bottom of the tag.)

Gathered in the spacious media auditorium, AAUW Mary Shaw welcomed the girls and explained they would visit four classes.

What came next was a surprise. Girls were told to check their name tags for a number from 1-17 and head for the woman holding a paddle with the corresponding number. That meant that BFF (best friends forever) were going to be split up. Most girls accepted the situation with equanimity.

I had volunteered to be a roving reporter, but when one volunteer couldn’t attend, I was assigned to lead Group Seven which I accepted with equanimity except that I could only observe four sessions.

In the spacious auditorium, I took snapshots of the girls and asked, “Do you know what you want to be when you grow up?”  Serenity Sandoval said, “I want to be a Marine Biologist because I love sea creatures and want to clean up the ocean.” (See pic.)

Makayla Chavez said, “I want to be a surgeon.”  I saw Dr. Teddi Swidinsky sitting nearby and said, “ Go talk to Dr. Swidinsky over there.  She’s a surgeon.”

Without hesitation, Makayla hurried over and they talked.

Our first session was in the Allied Health Building. When we entered the Nursing Simulation Lab we discovered bodies: our patients lying in hospital beds to be exact.

The girls eagerly grouped around a sick man. Nurse Lucia Gomez-Vaughn demonstrated how to listen for his heart beat. At the computer, Mia Griego and Mia-Roma later watched as Lucia changed something. (See pic.) After listening for a few seconds, Cielo Tapia shouted, “He’s having a seizure.”  And he was. (See pic.)

We were so engrossed that we lost track of time. Then we bolted out of the Nursing Sim Lab and headed in the wrong direction. When I realized my error and turned us around, we had a long walk.

En route, Lee’ Ari Morio asked, “Miss Beth, when you make a decision, should you use your head or your heart or your gut?” Thus ensued a philosophical discussion with several eleven year olds which blew me away as strongly as the winds bellowing across the campus. We finally agreed that you need to engage your brain and heart but in an emergency, listen to your gut.

By now we were at the Welding Shop.

We stood outside as Tracy Morales talked about her experience as a truck driver and advised, “You can become a truck driver right out of high school and save money to later pursue another career.” (See pic.)

Inside Gene Martinez gave us a safety lesson. He cautioned us that six students had already caught themselves on fire this semester. He revealed that girls make great welders because they can squeeze into places where guys are too big, and they get paid more than men.

He asked, “Who wants to weld?” And all hands shot up! The girls donned fireproof jackets, gloves and helmets. Under Gene’s supervision, the sparks flew. (See pic.) Time flew just like the sparks.

We scurried to another end of campus where Dr. Jennifer Aldred, visiting professor of Environmental Geology asked, “Who wants to be a rainmaker?”All hands shot up! We learned about permeability and porosity and poured water into a column to learn about different sediments.

We heard how precious fresh water is especially in New Mexico and played a board game about National Water Resources.

Our last class was with Dr. Billie Mathews who introduced the girls to PowerPoint. Each girl created a one-word message on a background of flowers or subtle pink. They chose words to define themselves like “happy,” “strong,” and “stitch.” The session was soon over, and we were on our way to lunch.

No philosophy discussions on this leg of the journey. I heard, “I’m starving.” “When I’m hungry I cannot think of anything else.”  “What do you suppose lunch will be?”  “Pizza.”  And it was.

After lunch the girls sat in the auditorium where Dr. Victoria Mora, President of UWC-USA told them about growing up from “Cabbages to College.”  Sitting again with their school friends, some girls were less than attentive, but I think they were worn out.

Girls Can was a huge success.  Simply put, 159 girls now know they can become whatever their heart desires including welders, geoscientists, truck drivers, sign language experts, nurses, entrepreneurs and surgeons.

AAUW greatly appreciates the presenters who are listed here:

•Brianna Montano LCC- What is an entrepreneur?

•Jesusita Smith LCC - How to take a Tire Pressure