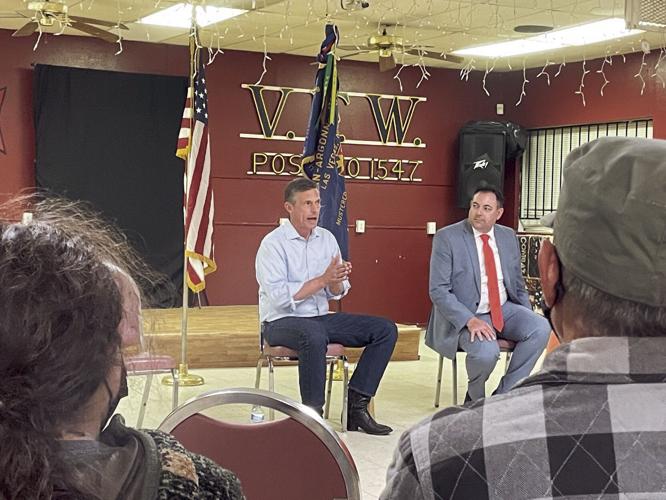 U.S. Senator Martin Heinrich met with local veterans at VFW Post 1547 Tuesday evening to discuss his efforts to save the local VA clinic from being closed. 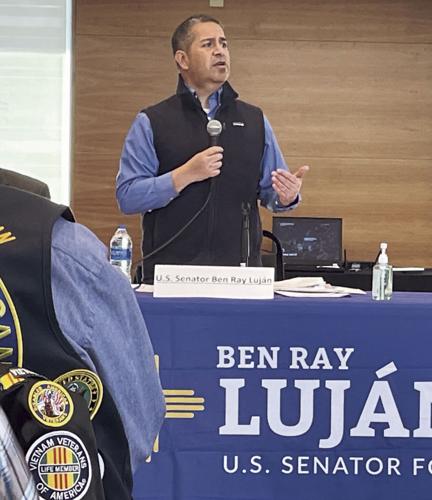 More than a month after the U.S. Department of Veterans Affairs recommended closing down four New Mexico VA clinics, including the one in Las Vegas, Senators Martin Heinrich and Ben Ray Luján, as well as Rep. Teresa Leger Fernandez, were in town to speak to local veterans as they fight to keep them open.

On March 14, the VA announced recommendations, following years of analysis, that would lead to the closure of community-based outreach clinics in Las Vegas, Española, Raton and Gallup, forcing veterans in those areas to seek treatment elsewhere, specifically at the Raymond G. Murphy VA Medical Center in Albuquerque, nearly two hours away from the current clinic in Las Vegas. In total, it was recommended that 174 local clinics, across all 50 states, close.

Though the process of actually following through on these recommendations, and potentially closing the local CBOCs, will be a long one, potentially taking years, lawmakers are wasting no time getting in front of veterans and letting them tell their stories in the hopes that personal accounts will sway the VA.

“Don’t feel like you need to convince me that it needs to stay open,” Heinrich said Tuesday as he spoke to a room full of veterans at the Las Vegas VFW Post 1547. “What I need from you is to arm me with the stories of what it’s like to live in a community and to need help where you are, and why it’s unreasonable to have to drive to Albuquerque.”

The veterans in attendance at both events were not short on stories. More than 50 veterans attended at least one of the two meetings with the senators this week. Many of them told their elected officials their stories and detailed, exactly, how losing access to their local clinic would impact them. Among the most vocal in attendance at Senator Heinrich’s event was Bob Phillips, who spoke at length about the challenges he would face if access to the local VA clinic was stripped away.

Phillips, who struggles with various back and knee issues, said traveling the long distance regularly to Albuquerque would do nothing to improve his current situation.

“Driving to Albuquerque is not comfortable,” Phillips said. “And the older you get, the harder it gets.”

He also said he feels, based on this ruling as well as several of his personal experiences, that veterans like him are not seen as a priority when it comes to healthcare.

“The feeling that I get is, why are veterans at the bottom of the healthcare system?” Phillips said. “I served my country, I’ve paid my taxes, and I have to fight like heck to get healthcare.”

The VA made its recommendations earlier this year based on the decline that local VA clinics in rural New Mexico have seen over the past five years. That includes a 55 percent decline in unique patients at the Las Vegas clinic, with more decline expected over the next decade, according to the VA’s recommendation.

However, Heinrich believes the statistics used in the report don’t take into account the current reality, as many numbers used are from 2019, before the COVID-19 pandemic began. Everything is different now, Heinrich said as he spoke to the local veterans.

Luján agreed in his meeting with veterans at New Mexico Highlands University Wednesday afternoon, saying that across New Mexico, 32 of the 33 counties in the state are facing healthcare staffing shortages, making it more difficult than ever for individuals, and especially veterans, to access the care they need.

“It doesn’t sound to me like we should be closing off even more access to care,” Luján said.

Heinrich, Luján and U.S. Representative Teresa Leger Fernandez wrote a letter to VA Secretary  Denis McDonough last week, inviting him to visit New Mexico and meet with the veterans himself to get a better understanding of how important these clinics are to people living in rural areas.

In the letter, the state’s elected officials ask the VA to reconsider its recommendations because of the impact the decision would have on rural veterans’ access to healthcare, due to travel and increased wait times from all of New Mexico’s veterans being forced into one centralized location.

The officials also said the decision does not take into account the increased healthcare worker shortages caused by the COVID-19 pandemic, and how the unreliability and lack of broadband internet access in this state, specifically in rural areas, would prevent telemedicine from being as realistic as it may be elsewhere.

Heinrich stressed that they are just now at the beginning of a yearslong process, and nothing has been officially decided. But he told the veterans he met with that he would continue to fight to keep the clinic open as long as it takes.

Luján detailed the process that will take place during his event. First, by Jan. 31, 2023, the AIR Commission must make a determination on the recommendations. The recommendations will then go to the President, and then to Congress, which will have the final say on what happens with the local CBOCs. Even if it passes Congress, it would take several years for everything to be finalized, according to Luján.

“Nothing is happening today, tomorrow or next week, but we want to make sure we keep pushing forward,” Luján said.

Phillips said keeping the clinic alive is important to him for his own sake, but especially for those that will come after him, the veterans of the wars in Iraq and Afghanistan, many of whom are not yet seeking frequent care from the VA, but likely will be in the years to come.

“There is not one of us here that wants to see that close because it needs to be there for the next generation of veterans that come along,” Phillips said. “I think anyone who lays down their life to serve this country and protect it deserves, and has earned the right, to be taken care of.”

As a veteran it is concerning to know that my fellow cohorts may be subjected to the never ending cycle of social determinants of health due to the alleged closing of VA clinics in Northern New Mexico. As I read this story it evokes red flags and disparities that plague marginalized communities to include people of color for centuries. These disparities include accessibility ( no transport to Albuquerque for VA health appointments), food, housing security, jobs, education, digital divide, and now equality/equity. Our veterans have paid the ultimate prize the benefits are entitlements and are not up for discussion.

The representation for our veterans via Veteran Affairs and VAMC have no concept of our, veteran culture, way of life and traditions. They continue to lack cultural Incompetencies to this date as I frequent the VAMC in Albuquerque and subjected to organizational and political discrimination. NM has healthcare shortages in 32 of 33 counties according to the NM delegation. Apparently COVID has played a major role for the healthcare staff shortages. On a personal note I'm conflicted with the hiring practices of the VAMC/Veteran Affairs. I have applied for numerous jobs that require a graduate degree in medical and hospital administration. If the VA would hire maybe there would be no shortages. The VAMC continues to hire people from different states that are not familiar with NM's culture and apply their dialect of hospital management practices( total disregard for NM's pluralistic veteran population). Our veterans deserve leadership that is from NM. New Mexican's that are familiar and respects our cultural differences. They deserve leadership practices that understand that veterans from Northern NM are just as important as those from any other State in the Union.